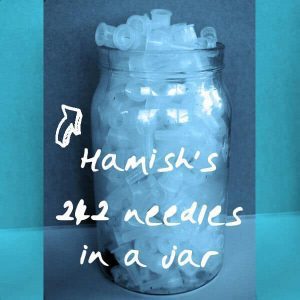 This was the number of needles we delivered to our local chemist today in our monthly ritual of ‘sharps disposal’. It probably was a similar amount last month and will probably be a similar amount next month. An average of around 8 needles a day, sometimes more, sometimes less, depending on the type of day we are having or the insulin we are using.

We don’t use a sharps bin for our needles – those ugly yellow safety tubs – we use a nice glass jar with a star on it, a gift from a friend the Christmas Hamish was diagnosed with Type 1 Diabetes. It somehow makes us feel better to see each needle drop into something stylish. Don’t ask us why, it just does! Then, each month, as the jar starts to overflow, we transfer those little needles into an empty milk container for transportation to the Chemist. Another month down and a nice empty clean jar ready for the next day to arrive.

You are probably asking “Why don’t you use an insulin pump?”. Well, for us as the ‘injectors’ and ‘disposers’ of needles, the insulin pump would seem like a pretty good option. Every ‘pumper’ we have ever spoken to believes it has changed their life – least of all because you only need to change one cannula every 2-3 days vs a regime of multiple injections each and every day. The benefits of control and flexibility seem awesome let alone the ability, when paired with a CGM system, to stop delivery of insulin when you are too low. 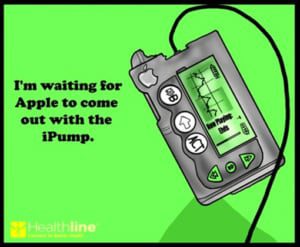 For Hamish, however, it’s a definite ‘no way’.  The initial discussion of technology and associated apps was very appealing – we think he could see himself as a real life ‘iHamish’. But when the reality sunk in that he would have the pump permanently attached to his body, day and night, it soon took the shine off adding a new device to his technology portfolio.  Even the fact  that he could remove it for one two-hour period if he was say, surfing, didn’t change his mind. He just couldn’t come to terms with the fact that it would be ‘always there’.

Adding to the “to pump or not to pump” debate was the fact that Hamish doesn’t care about the needles. He could have 18 needles a day and he wouldn’t blink. So we figure as long as he is OK, we are OK. After all, it is his body and it is ultimately his call.

That’s not to say one day in the future he won’t go on to the pump. We will keep discussing it, looking at ways it will help him and how he could fit it into his very active lifestyle. We would never say never and we know he wouldn’t either.

Until then, we will keep filling up that jar, one needle at a time.

Yours, injecting, not pumping, Jen, Brad and Hamish

The complications of a complicated disease

Hamish’s grandfather (or as he calls him, ‘Bampy’) has had Diabetes for almost 30 years. He was originally diagnosed as... read more

A couple of months ago Hamish announced out of the blue that he knew why he wasn’t invited to... read more

It's Thursday and we've had Hamish's best HbA1c result ever so we thought we'd celebrate with a #diabeteswontstopme video! Make... read more

Hamish ran the 'Colour Run' on Sunday and proved that even a hypo mid way wasn't going to stop... read more