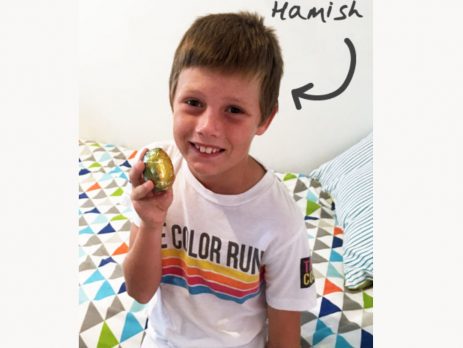 We haven’t found the need to hashtag before but we figure if we are going to start, this is as good a place as any. #diabeteswontstopme. This is how Hamish lives his life and was top of mind as we kicked off Easter with a trip to the Royal Easter Show. To be honest, Easter is the one ‘event’ we dislike the most when it comes to managing Type 1 Diabetes. But we have committed to Hamish right from the time he was diagnosed that he would live life like other kids so we have to roll with it. #diabeteswontstopme

We both remember Easter Sunday as the one day of the year where our mum’s let us eat chocolate for breakfast, and it is definitely a tradition that we have passed down to our kids! So as we woke on Sunday to the screams of the Easter Bunny having been to our house and the subsequent ripping of Easter egg foil we began the day of juggling chocolate intake with BGLs and insulin, more so than a regular day.

It just so happens that this year, Hamish was going through a growth spurt over Easter. This means two things: 1. He is extra, extra hungry and 2. His insulin pretty much refuses to work. It’s a double whammy. His body is far too busy lengthening arms and legs to worry about a little thing like insulin, even the synthetic kind. With BGLs hovering between 15-20 (for those of you not in the know, a person without diabetes will have a BGL level somewhere between 4-8) and a voracious appetite, we play test and inject all day long. In true Hamish style, he doesn’t complain when we test him for the 3rd time and deliver his fourth injection and it’s not even 11am. #diabeteswontstopme.

Living life like any other kid
So this approach, living life like any other kid, is a principle we have pretty much stuck to since Hamish was diagnosed. When it comes to food, we treat Hamish the same as our other two children – we want him to eat healthy for the majority of the time but allow the stuff that’s not so great as long as it’s in moderation. Parties? Go for it. We don’t say no to what’s on the table but deal with it as it comes along, compensating for the rush of lollies and cake that are inevitable in this situation. Sleepovers? Yep, if the other child’s parents are willing to do the 11pm/3am test regime and text us for guidance then we run with it. And there is not a sport Hamish won’t have a crack at. Surfing, skateboarding, soccer, cricket, bike riding, trampoline gymnastics, running, snowboarding. He went in every single event at his first swimming carnival, even the butterfly. Go figure. #diabeteswontstopme

If only the actual doing part of ‘diabetes won’t stop me’ was as easy as the hashtag. In reality it’s not. It takes a lot of trial and error, guessing and adjusting. Getting Hamish’s levels right so he feels good and therefore can perform at his best for the many sporting activities he does is a good example. It took us four years to finally crack the Cross Country race, with last year Hamish making District for the first time. And for the first time in those four years of running the race he wasn’t suffering a hypo (too low) or a hyper (too high) just as the race began. We viewed it as a small miracle but it involved lot’s of planning on the morning with food and insulin, extra tests, and aiming for a BGL of around 10 pre-race, something we picked up from a sporting family who also deals with Type 1 Diabetes.

When Hamish crossed the line in third place and qualified for District we all in that moment – the two of us, his aide Miss Cherie, his grandparents and Uncle Pete who were watching, and definitely, definitely Hamish – felt that #diabeteswontstopme

It was an awesome feeling.

So while it can sometimes feel like we don’t win the battle we definitely on the whole win the war. What we mean by that is we still have moments where we struggle to get it right. In our determination to give him the same life experiences as a child without Type 1 Diabetes we make mistakes, misjudge how to handle situations, look back and think how we would have done it differently. Too many lollies at a party resulting in a BGL of 25 because we didn’t want to single him out to stop eating when the other kids were going for it. Not pulling him aside from the team to check his BGLs before he takes the soccer field only to realise at half time that he is having a hypo. We lost those little battles but when we look at Hamish’s life in totality, we have a lot more examples of where we have got it right and as a result Hamish doesn’t miss out on a thing. We know it’s the right thing to do and we are going to stick with it. #diabeteswontstopme. Not a chance.

Yours in Easter Egg madness