The meter read ‘HI’– the words Hamish’s Blood Glucose Monitor uses to tell us that his levels are so bad, it can no longer display how high they are. Not a good thing to see. What had happened?

It was pretty simple. Hamish had come home from school and gone to his Nan’s for a visit. He decided he wanted a milkshake and when Nan asked him about testing himself and whether he needed to have a needle he said “No, I’m fine, I feel good.”

A few more bits of afternoon tea, no testing, no needle and ‘HI’ is the result. This was the second time in as many days Hamish had been with someone else, refused a BGL test and needle and eaten.  He has been getting fed up with the restrictive and intrusive nature of Type 1 Diabetes and decided to just pretend it’s not there.

Only problem is that this has life-threatening consequences. Persistent and consistent high BGL readings can lead to ketoacidosis which is a dangerous build-up of chemical substances in the blood. And there are also longer term impacts such as eye disease, nerve damage, kidney disease and heart disease. But how do you explain this to a 9-year-old who just wants to be like everyone else that he can’t let this happen?

Our first reaction was to be mad – but mad out of desperate love and the need to protect your child from any harm. How could he risk his health like that? But once that initial exasperation past, we felt as though we couldn’t really blame him for wanting to escape the rigour of Type 1 Diabetes. But it didn’t make it OK.

We decided to wait to talk to him, not discuss it in the heat of the moment and ensure that when we did explain how serious his actions were that it was done in a way that didn’t make him want to rebel even more. We’re not sure we succeeded or that it sunk in – and we are pretty sure it’s not the last time it will happen.  From talking to other parents with Type 1 Diabetic kids things like this can become an even more frequent occurrence in the teen years where hormones and rebellion really settle in! 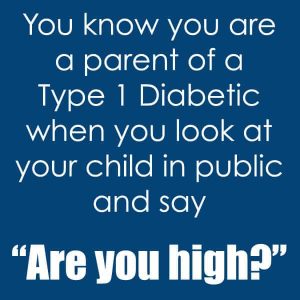 As for Hamish, we did have to remind him that we trust him to watch out for his health by letting him go off with friends and family without our supervision. If he couldn’t show that he took the responsibilities of Type 1 Diabetes seriously then we would need to change our approach and reign him right in. And we’ve had a stark reminder that we need to stress to any adult that he is going with that he can never not test himself or inject to accommodate for the food he is going to eat.

We have made a bit of progress with Hamish in our last endocrinologist appointment where he has agreed to trial a Continuous Glucose Monitor, which will hopefully help to make the process a bit easier and less disruptive when it comes to understanding his levels. It gets fitted tomorrow so we will keep you posted!

Until next time, yours in a constant battle against Diabetes

Since Hamish was diagnosed with Type 1 Diabetes at the age of 4 years we have struggled with how... read more