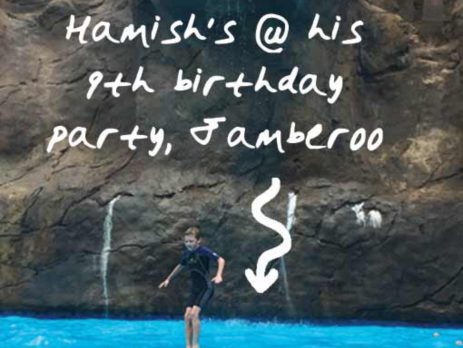 Hamish went to an awesome birthday party a couple of weeks ago for one of his best mates Charlie. It was at a local beach and was three hours of surfing, swimming and  skateboarding followed by a sausage sizzle, cake and then home. It was an ideal situation for a Type 1 Diabetic 9 year old boy – heavy on the exercise, light on the party food. And an ideal situation for us as the parents, where our biggest concern was keeping his levels up enough to cope with all the activity. We can happily say that this type of birthday party is pretty much the norm now for Hamish, but it wasn’t always the case.

The largest table of party food  –  ever
When the kids are younger, birthday parties are more heavily focused on party food and enticing party treats. And it’s not just the sugar-rich stuff that we have to worry about – given Diabetes is ruled by carbohydrate consumption pretty much any party food, sweet or savoury, creates a potential BGL problem.

Our very first day out of hospital after Hamish was diagnosed at age 4 with Type 1 Diabetes was a birthday party. Sigh. It was like someone was trying to test us – what had we learned in that one hectic and total-blur of a week in hospital that we could apply in a real-life situation? We braced ourselves and tried to recount the advice we had been given about birthday parties:

1. Let them eat whatever the other kids are eating, don’t make them feel different. We love this piece of advice and if you read our blog from a few weeks ago it is something we try to live by for everything, not just food…Except when the other kids are shoveling marshmallows into their mouth ten at a time followed by two chocolate crackles and a sausage roll. Then it poses somewhat of a Diabetic problem!

2. Let them run around to offset the party food. Sounds reasonable, except if your son is feeling a bit disoriented after a week in hospital and wants to cling to either the food table or your leg. No exercise there.

3. Give them diet drinks or water instead of what’s on offer at the party. Got that one covered. Oh, didn’t see him grab that huge cup of cordial off the table, but did see him down it quick smart. Bugger.

4. When they get the party bag, try to give them one thing and then put the bag away. Yep, good luck with that one!

5. Manage the consequences post-party with extra insulin or less food. To be honest, this ended up being our best option. After we cajoled, distracted, tricked and begged Hamish away from the other kids hovering around the largest table of party food ever, we gave in. We let the novelty of plates of chips, chocolate, lollies and fairy bread wear off and then worked it out over the next few hours at home.

Our memories are not great of that first party. It was angst ridden and we lost count of the amount of times we tested him. There were tears (from all of us) and we were sure we had failed our first party test, fresh out of hospital. A huge BGL reading worthy of multiple ketone tests and a good dose of extra insulin got us through the night.  Five years on, we still have hits and misses, although it’s much, much easier. Not only are parties more action-oriented but Hamish knows so much more about what is good for him and what makes him feel good. We still go by the ethos that whatever everyone else is eating is fine, and we sort out later the impact of the food consumption.

For he’s a jolly good fellow!
So what are our final thoughts on parties? Now, at age 9,  we feel like we are in a good place with Hamish. Low on party food, high on fun.  But rewind a few years? That age up until they are around 8 years old? We’re not going to lie, they give a Diabetic parent an extra five grey hairs for every party they attend. It’s hard enough to watch a non-diabetic child shovel their own body weight in refined sugar into their mouths let alone a child with Type 1 Diabetes.

If you’re hanging around for the party you get to witness how much they are overloading on the carb front and are either singling them out to test and inject, or secretly crying at the impact you know it is going to have on their little bodies later on. If they are old enough to do the drop and run, you don’t get to witness the carnage but you worry  – probably even more – knowing that anything could be happening and you will have to deal with the aftermath at pick-up time.  But with all that said and done, who doesn’t love a party? And if we are going to create a sense of never missing out on anything we just have to wing it as we go, hope that we make it through relatively unscathed and try to enjoy their joy at getting to experience what we all got to experience as kids.

So we say “Party On, People”
Jen, Brad and Hamish

PS Here is the latest video on our #diabeteswontstopme series – this time, Hamish carving up the surf at Stanwell Park!