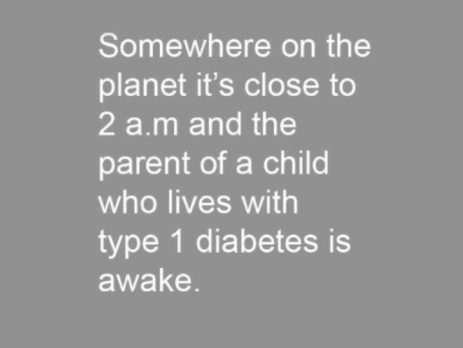 We saw this quote on a website the other day and the truth of this saying made us both laugh and sigh with sadness.

Hamish has zero awareness during the night if his BGLs have dropped into dangerous territory. He doesn’t wake up, toss and turn, disturb, come too and feel funny – there is no indication, nothing. No matter what the level, whether it be 4.0, 2.7 or even 1.9 on one scary night he feels nothing. The threat of a Diabetic coma feels much more real when there is nothing to pre-empt his decline. So with this in mind our decision to wake up in the night seems pretty straightforward.

For us, it begins with what we refer to as our ‘benchmark test’ at around 9pm. This BGL reading is how we judge at 11pm whether we need to get up in the middle of the night. We look for the difference in levels between the two readings to give us a guide as to what might be happening with Hamish’s BGLs (although it’s by no means foolproof!).

11pm rolls around and if Hamish’s BGL has come down too much we wake him to eat and then set the alarm for anywhere between 1am to 3am. Equally, if his BGLs have risen to a level that is too high we will give him another needle and then get back up two hours later to check he has returned to a good range.

“I go to bed each night with the fear that I won’t wake up and wake up each day with relief that I did.”

And then there are the nights where at 11pm his BGL seems to be good and in theory he should be fine to make it through the night. Doubt sets in – what if he doesn’t? What if tonight is the night that we should have woken up and we chose to sleep and as a result, Hamish doesn’t wake up. It sends shivers down our spine just writing that but it’s the truth of what we feel.

We recently read a letter from a young girl in her late 20’s who has had Type 1 Diabetes since she was a baby. She summed it up perfectly when she said “I go to bed each night with the fear that I won’t wake up and wake up each day with relief that I did.” Those mornings when we have made the decision to not do a 3am test – the first thought is to look for a sign that Hamish is OK… a movement in bed, a sleepy mumble or a smiling face looking back at us. The relief is palpable.

There was a short period of time after about 2 years of getting up every night we started to let Hamish ‘run a little on the high side’. We feel so guilty when we look back now but at the time, if he had a BGL of around 12 before bedtime we did nothing and were pretty much guaranteed to make it through the night. The feeling of not having a disturbed sleep was awesome.

What wasn’t so awesome was the realisation that this was not good for his little body. Whilst his BGLs weren’t in the giddy heights of 15 + they were just enough to sway his HbA1c into the not so ideal territory (HbA1c is a quarterly blood test showing the average of blood glucose level over the past 3 months. It’s how you judge whether you have been managing the Type 1 Diabetes well enough. For parents it feels like a pass or fail moment at your quarterly endocrinologist appointment!)

We now reserve this ‘run it a little bit high’ strategy for sleep over’s so as to avoid passing the pain of the 3am alarm on to the parents of his friends. For us, however, it’s now a proactive response every night with a needle for anything over 10 and the obligatory re-check in 1-2 hours time.

“Dear sleep, I know we had problems when I was younger but I love you now”

Undisturbed sleep sometimes feels a distant memory, a bit like having a newborn but extending that into years and years of waking up a few times a night. If we are lucky, we wake up once for a quick test in the early hours of the morning and then back to sleep. If not, that 1am/2am/3am test involves either Hamish eating or having a needle and then a second alarm is set.

Either way, the toll on us can’t really compare to the toll on Hamish who compliantly chomps on biscuits and sips juice at 3am in the morning or rolls over for yet another jab in the bum. Hopefully, as new technologies such as Continuous Glucose Monitoring become more prevalent and are supported by the Government and Health Funds there will be a better way to deal with the uncertainty of the night time BGL. Until then, we would rather risk a bit of sleep deprivation than face the consequences 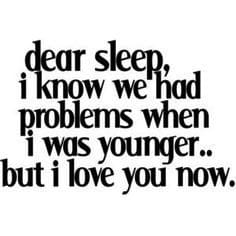