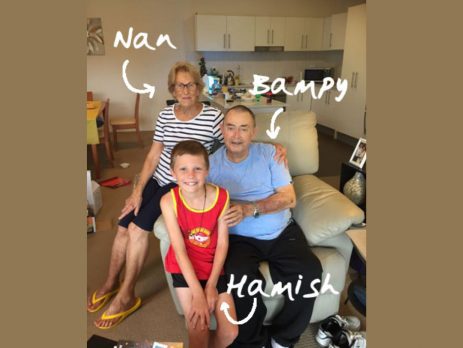 Last week we wrote about Hamish’s diagnosis with Type 1 Diabetes and how in an instant it changed everything. One day we knew nothing about BGLs, insulin and hypos and the next we were sitting with an Educator, a Doctor and a Counselor learning how to deal with this new way of life. It got us thinking, though, that it wasn’t just us that Diabetes impacted. Hamish’s diagnosis touched everyone around us. It was The Diabetes Ripple.

Both sets of our parents (Nan and Pop and Nan and Bampy) felt the immediate ‘punch’ of the diabetes diagnosis. Like us they were stunned, shocked, confused and sad – very, very sad. But as the dust settled and we returned home, the reality of life with Type 1 became clearer and much more real. It was not just us that had to understand this new way of living; the grandparents had a huge role to play too, especially as they were part of our childcare routine.

So we had to start transferring our newfound Type 1 Diabetes knowledge to our parents – and knowledge would be a very loose term, as in hindsight we really knew nothing! If it was daunting for us, imagine what they felt like, especially coming from a generation where carbohydrates weren’t a natural part of your vocabulary let alone exchanges. But they took it on and did whatever they could to help ease the new burden we faced. Nan and Bamp, Nan and Pop – thank you, you are our rock amidst this ripple, especially for Hamish.

It spread far and wide

When Hamish was diagnosed he was three months off kindergarten and was just going through the orientation process. What were we going to do? We were struggling to comprehend how we would manage the day-to-day let alone throwing the concept of starting school into the mix. In the midst of all this despair – and it was despair – came our first glimmer of the willingness of people outside of our immediate family to deal with The Diabetes Ripple.

After a tearful call to Hamish’s new school we found that they had had previous experience with a Type 1 Diabetic child so knew the drill. They organised an aide for Hamish – Miss Cherie –  who, thank goodness, is still with Hamish today checking his BGLs, giving him his needles, travelling to excursions and generally making sure he is AOK at school. Miss Cherie is the closest thing to an angel and we consider her to be Hamish’s mother-at-school. The ripple now even touched what was once a stranger but is now a member of the family. Thank you doesn’t ever seem enough Miss Cherie.

And then it returned closer to home

Last  – but in no stretch of the imagination least  – the Diabetes Ripple came to Hamish’s friends and their parents. When your child is first diagnosed the most natural question you ask is “will he lead a normal life”. We now know that of course he can (what’s normal any way?) but a big part of that life, especially as a very social four year old was play dates and sleep overs. How was this going to work?  Well through this crappy situation we found that we lived in a community that has some of the most amazing kids, mums and dads that have ever walked this planet, no exaggeration.

Without hesitation, they put up their hand asked if they could learn what to do – how to manage his levels, his food, his needles. And we in turn learned to say yes, accept their offer and let them give it a red-hot go. They may have been petrified but they did it anyway and gave Hamish back his sense of normality and for that we will be forever grateful. Kylie and Corey, Nic and Ben, Vicki and Dave, Trudy and Andrew, Kelly and Rob. Thank you.

And what about Hamish’s friends? These kids are compassionate, kind, involved, curious, and in full admiration of Hamish who many times a day has to produce blood from his finger and get a needle stuck in his bum. They laugh with him, support him when things aren’t so great and never, ever make him feel like he is different. These little boys who, from the age of four and five knew much more about Type 1 Diabetes than a four or five year old should ever know were – and still are – bloody amazing. You rock Elliot, Kai, Charlie, Fred and Alex.

The Diabetes Ripple continues to hit people we come into contact with on a regular basis. When Hamish starts a new sport, attends a school holiday clinic, makes a new friend, goes on a school camp, travels overseas, attends a birthday party   – each event or interaction often means a new person to ‘teach’ and a new person to get some little glimpse of life with Type 1 Diabetes.

But the one thing having a child with Type 1 diabetes has shown us is that our family and friends, acquaintances – and even the strangers we come into contact with – are people who don’t mind a bit of ripple in their lives and are happy to help make our life a little less ripple-y. So whilst we may be in the centre of The Diabetes Ripple we know we have a lot of rocks to stand on. Thank you to all of you whether we know you or not.